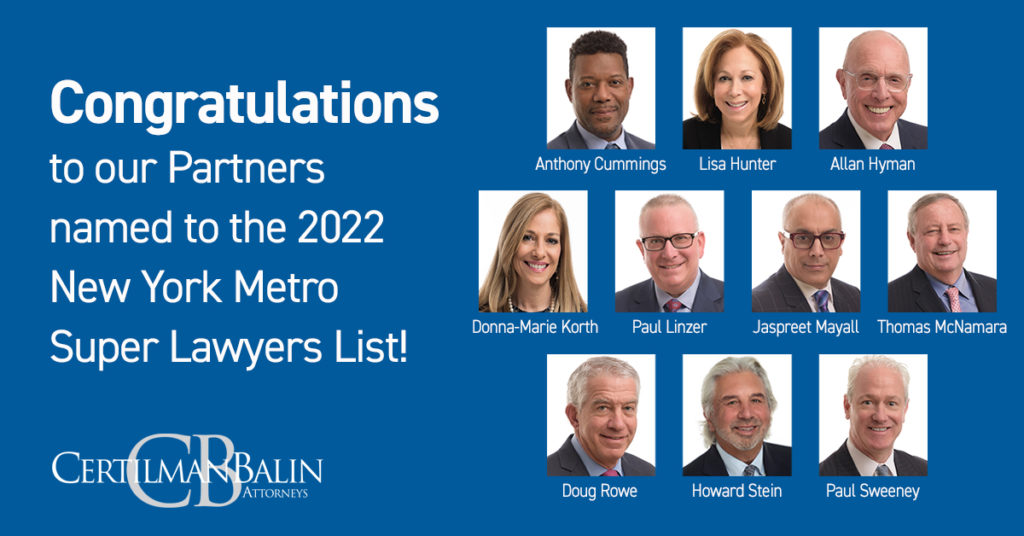 Anthony W. Cummings  is a Partner in our Litigation Practice Group where he represents clients in an array of commercial litigation matters. Prior to joining our firm, he was a solo practitioner, a business executive and an adjunct professor.   He represents clients in business related or commercial matters including breach of fiduciary duty, fraud and misappropriation of trade secrets, breach of franchise, exclusive distributorship, shareholder and stock purchase agreements, corporate dissolution, landlord-tenant, product and premise liability matters. He also participates in litigation arising from real estate development projects and investments in various forms and structures. He earned a Juris Doctor from the Maurice A. Deane School of Law at Hofstra University, a Master of Business Administration from the University of North Carolina, Kenan-Flagler Business School, and a Bachelor of Science in Applied Economics from Hofstra University.

Allan Hyman (Sands Point) is a senior partner and practices in the firm’s litigation, real estate tax certiorari, and condemnation law departments. He has successfully obtained millions of dollars of tax refunds and savings for clients during his 50 year professional career. Additionally, his practice focuses on representing both claimants and condemnors in eminent domain proceedings throughout the State of New York and other jurisdictions. A graduate of Syracuse University, B.A., Mr. Hyman also holds a Juris Doctorate from St. John’s University Law School. He is admitted to practice in New York State and before the United States District Courts for the Eastern and Southern Districts of New York, the Circuit Court of Appeals, Second Circuit, and the United States Supreme Court. He is a member of the New York State Bar Association, the Nassau County Bar Association, and serves on the Tax Certiorari and Condemnation law, Supreme Court, and Commercial Litigation committees of the Nassau County Bar Association.

Paul Linzer (Brooklyn) is a Partner in the Labor Relations and Criminal Law Practice Groups. He concentrates his practice on all aspects of public sector labor law litigation, as well as criminal defense litigation.  Mr. Linzer serves as labor counsel and/or general counsel to a variety of public sector labor unions and their membership. These include the New York City firefighters’ union, many County, Town, and Village-level Police unions, and the supervisors’ union from the New York City Department of Correction.  He represents these unions in all labor and civil litigation matters including their grievance arbitrations, improper labor practice proceedings, policy negotiations, collective bargaining of contracts, interest arbitrations, drafting of potential legislation, and any matters in State and/or Federal Courts. He also represents union members in Internal Affairs, disciplinary proceedings, or other internal or external administrative or criminal investigations.

Paul B. Sweeney (Glen Cove) is a Partner in the Litigation Practice Group  and represents clients in a broad range of commercial litigation matters before state, federal and appellate courts. He is well-versed in the following areas of law: contracts, securities, accountant’s liability, legal malpractice, trade secrets, intellectual property, antitrust and class actions. Mr. Sweeney has handled numerous cases involving issues of corporate governance in which he represented corporate officers and directors, as well as members of limited liability companies. He has also represented clients in employment matters concerning the enforcement of restrictive covenants and discrimination claims. He earned his Juris Doctor, cum laude, from Fordham University School of Law in 1992 and his Bachelor of Arts from the University of Vermont in 1987. In addition, Mr. Sweeney achieved the highest rating by Martindale Hubbell. From 2013 through 2019, Mr. Sweeney was named consecutively to the New York Metro Super Lawyers list. 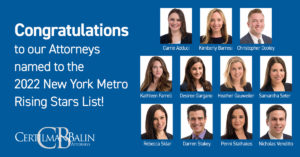 Christopher P. Dooley (Malverne) is an Associate in our Litigation Practice Group.  Prior to joining the firm, Mr. Dooley was an Assistant District Attorney in the Queens District Attorney’s Office for five years.  Mr. Dooley earned his Juris Doctor from St. John’s University School of Law and attended on the St. Thomas More Scholarship, a full tuition award. Mr. Dooley earned a Bachelor of Arts in Philosophy from St. Anselm College. He was a Presidential Scholarship Recipient and Vice President of Public Relations of the Rugby Club.

Kathleen Farrell (New York City) is an Associate in the Real Estate Practice Group and concentrates in the areas of commercial leasing, asset purchase and sales, and real estate development. She represents clients at the local, regional and national level, including commercial property owners and tenants from independent retail stores to major institutions and businesses. She and her team recently closed a substantial transaction involving the sale of 61 acres in Farmingville, New York. Ms. Farrell earned her Juris Doctor from the Maurice A. Deane School of Law at Hofstra University and was on the Dean’s List. She earned her Bachelor of Arts, cum laude, in Literature and Rhetoric with a minor in History from Binghamton University.

Samantha Seter is an Associate in our Corporate/Securities and Nonprofit Practice Groups.  In her corporate and securities practice, she concentrates on mergers and acquisitions involving privately held companies, commercial contracts, corporate finance and mergers and acquisitions, with an emphasis on securities law, including matters involving public and private offerings, periodic reporting, corporate governance and other general corporate matters.   In her non-profit law concentration, she counsels and advocates for not-for-profits and religious organizations in a wide variety of areas, including governance, regulatory matters involving the Internal Revenue Service (including 501(c)(3) qualification) and commercial matters.   She earned a Juris Doctor from St. John’s University School of Law and a Bachelor of Arts in Political Science from Sacred Heart University.

Darren Stakey (formerly of Riverhead/currently, Baldwin Harbor) is an Associate in the Litigation, Real Estate, and Condominium Practice Groups. Mr. Stakey is admitted to practice law in New York, California, and the District of Columbia.  He is also admitted to practice in United States District Court for the Eastern and Southern Districts of New York and the United States Supreme Court. He was the 2015 Salutatorian at Touro College Jacob D. Fuchsberg Law Center, a published member of the Touro Law Review, and a National Quarterfinalist with Touro’s Moot Court Honors Board. He was recently honored by Touro as the Public Interest Attorney of the Year. He was inducted into Phi Beta Kappa at Hofstra University and worked in education and the private aviation industry before becoming an attorney.

For further information, please visit SuperLawyers.com and the attorneys’ biographies on certilmanbalin.com or contact Debra Scala Giokas. Director of Marketing, at 516.296.7087.