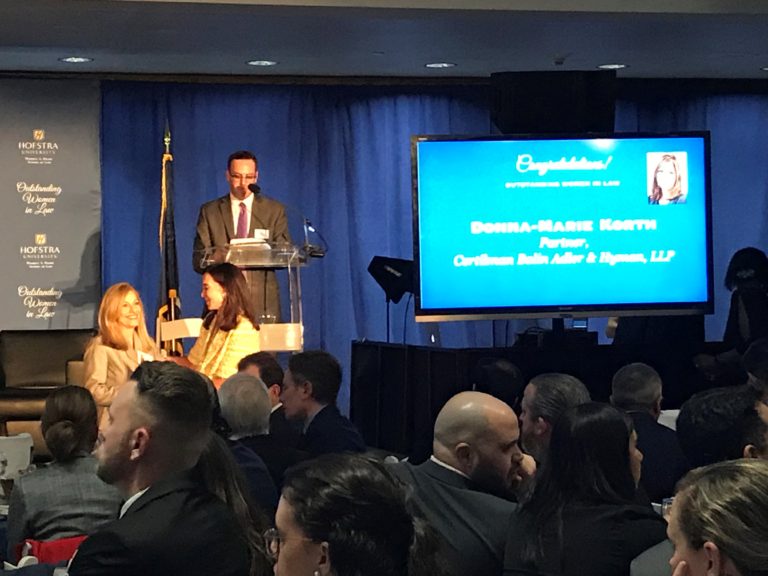 April 23, East Meadow, NY – Donna-Marie Korth (resident of Rockville Centre), Partner in the Litigation and Coop/Condo Practice Groups at Certilman Balin Adler & Hyman, LLP, was honored as an Outstanding Woman in the Law by Hofstra University on April 22. The award celebrates women who have made meaningful contributions to the legal community. Former Manhattan Family Court Supervising Judge, Judge Judy Sheindlin, was honored with the Lifetime Achievement Award. Proceeds from this event, which was hosted by Judge Gail Prudenti, Dean of Hofstra Law, support the programs of Hofstra Law including the Center for Children, Families and the Law.

Ms. Korth litigates all aspects of commercial and real estate law, including banking and commercial foreclosure, and handles lending workouts. She also handles the regulatory work for residential and commercial developments.Certified to mediate a wide variety of civil disputes pre or post-litigation,  she was appointed to serve on the Commercial Mediation Panel in Nassau County Supreme Court, Superstorm Sandy/Natural Disaster Mediation Panel in Eastern District of the United States District Court, Alternative Dispute Resolution Panel of the Nassau County Bar Association, and is a member of the ADR Advisory Council of the Nassau County Bar Association.

Ms. Korth was named to the New York Metro Super Lawyers list in 2017 and 2018. She was recently selected by Hofstra University School of Law as a 2019 Outstanding Woman in Law.  Long Island Pulse Magazine selected her as a Top Ten Legal Eagle in 2013. Long Island Business News included her as one of its “Ones to Watch” in 2017; as a Who’s Who in Women In Professional Services in 2016; as one of Long Island’s Top 50 Professional Women in 2000 and 2004; and counted her among the 40 Under 40 Class in 2000, naming her “Class Salutatorian.” She also received the Leadership Award from the National Multiple Sclerosis Society, and in 2006, Touro Law Center named her Outstanding Pro Bono Attorney. Ms. Korth serves on the Black and White Ball Committee for NYU Winthrop Hospital’s Cancer Center for Kids and was the honoree in 2015. Along with her spouse, Ms. Korth serves on the Advisory Board of Chaminade High School Parents Club and is an active member of the University of Notre Dame Parents Club.