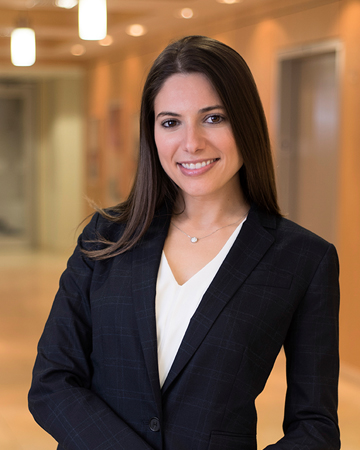 August 26, East Meadow, NY — Samantha Hiltzik, an Associate in the Corporate/Securities and Nonprofit Practice Groups at Certilman Balin Adler & Hyman, LLP, has been named to the Young Professionals Advisory Board (“YPAB”) of MENTOR New York.  YPAB is a group of emerging leaders who dedicate their time, talents, networks and resources to raise awareness and support for MENTOR New York as it works to close the mentoring gap in New York by providing a myriad of services to mentoring and youth development across the state.

In her non-profit law concentration, she counsels and advocates for not-for-profits and religious organizations in a wide variety of areas, including governance, regulatory matters involving the Internal Revenue Service (including 501(c)(3) qualification) and commercial matters.

Ms. Hiltzik earned a Juris Doctor from St. John’s University School of Law and a Bachelor of Arts in Political Science from Sacred Heart University. As an undergraduate, she was a member of the NCAA Division I Women’s Track and Field Team.

She serves as a mentor to 4th and 5th grade students at Walnut Street Elementary School in Uniondale, as part of the Lawyers Involved in Kids’ Education (“LIKE”) Program. The LIKE program is affiliated with Mentor New York.  She is also a member of the Constantinople Armenian Relief Society (“C. A. R. S.”) in Bayside, New York.

She is admitted to practice in the states of New York and New Jersey.

For further information, contact Debra Scala Giokas, Director of Marketing at 516.296.7087 or dscala@certilmanbalin.com.

Each year, the YPAB play an instrumental role in the coordination of MENTOR NY’s annual event to celebrate mentoring and honor the memory of Luke Boisi, who tragically passed away at the age of 21. The brother of Zach Boisi, a former Director of MENTOR New York, and the son of Geoff Boisi, the founder of MENTOR National, Luke Boisi was impacted by mentoring and spent the last few years of his life committed to helping others through his service with AmeriCorps. This year’s event, held virtually on September 23rd, continues this legacy by celebrating Luke’s memory and honoring outstanding mentors from across New York. Learn more: www.mentornewyork.org/mentor-of-the-year.