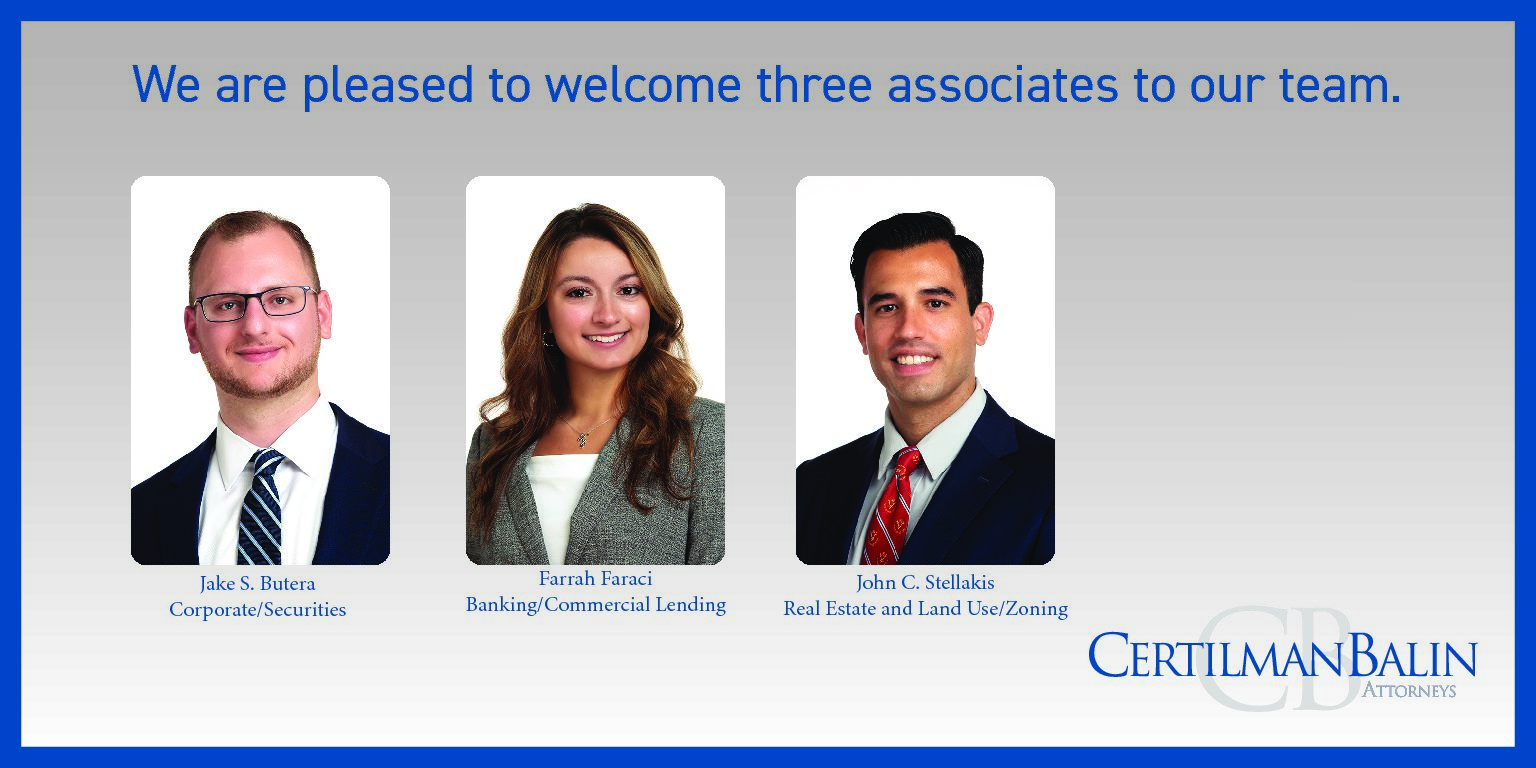 Mr. Butera (resident of Lindenhurst) practices in the Corporate/ Securities Law Practice Group. He earned his Juris Doctor from Touro College Jacob Fuchsberg Law Center and his Bachelor of Business Administration from Hofstra University. In law school, Mr. Butera participated on the Moot Court Honors Board. He was a member of the Phi Alpha Delta Society of Scholars; a Merit Scholarship recipient and earned a CALI Award for Academic Excellence in Negotiations. In addition, he was honored with a Faculty Recognition Award for Academic Excellence in American Legal Studies Practicum and Advanced Legal Research. He held internships at the Bankruptcy and Mortgage Foreclosure Clinic at Touro Law Center; the Office of the Chief Town Attorney, Town of Babylon; and at a sole practitioner’s law office. A member of the American Bar Association, the New York State Bar Association, the Nassau County Bar Association and the Suffolk County Bar Association, Mr. Butera is admitted to practice in the state of New York.

Ms. Faraci (resident of North Babylon) practices in the Banking and Commercial Lending Practice Group. She earned her Juris Doctor from Touro College Jacob Fuchsberg Law Center and her Bachelor of Arts, cum laude, in history. During law school, Ms. Faraci completed numerous externships and internships. She was a legal extern to The Honorable Judge Caren Loguercio; an intern at the Veterans Clinic at Touro Law Center; and an intern at the Town Attorney’s Office, Town of Babylon. She also completed internships at the Legal Aid Society of Suffolk County, the Suffolk County Attorney’s Office and for a sole practitioner. Ms. Faraci was a Bainbridge Finalist on the Moot Court Honors Board, completed a Public Interest Fellowship and served as secretary of the Women’s Bar Association. In addition to her involvement with the Student Bar Association, she was an assistant in the offices of Admissions, Alumni Relations and Institutional Advancement. She is admitted to practice in the state of New York.

Mr. Stellakis (resident of Village of Patchogue) is an Associate in our Land Use and Zoning Practice Group. Prior to joining Certilman Balin, Mr. Stellakis was an Associate in the Land Use, Municipal and Environmental Group at Farrell Fritz where his Federal and State motion, trial and appellate practice encompassed an array of matters including Article 78 litigation, municipal and zoning issues, environmental protection and liability, real property and riparian rights, and NYSDEC and NYSDOH regulatory compliance.

Mr. Stellakis earned his Juris Doctor from Villanova University School of Law and his Bachelor of Arts, cum laude, in Philosophy and Political Science from Villanova University. He is a graduate of Chaminade High School. During law school, he served as the Symposium Editor and a Staff Writer for the Environmental Law Journal, and was recognized with the Outstanding Staff Writer Achievement Award. Mr. Stellakis worked as a law student attorney in the Clinic for Asylum, Refugee and Emigrant Services, representing a refugee and her family throughout the asylum process. He also served as a law clerk for a pro bono clinic assisting victims of Hurricane Katrina and for the New Orleans Workers’ Center for Racial Justice Clinic. Mr. Stellakis received the Dorothy Day Award for Pro Bono Service.

He is a member and the Vice President of the Federal Bar Association, Eastern District of New York Chapter, and previously chaired the Young Lawyers Division. He is the former Co-Chair of the New Lawyers Committee of the Nassau County Bar Association, and volunteers with the Nassau Suffolk Law Services’ Volunteer Lawyer Project, representing indigent tenants in landlord-tenant court. He is admitted to the states of New York and New Jersey, as well as the Eastern and Southern Districts of New York, and the District of New Jersey.