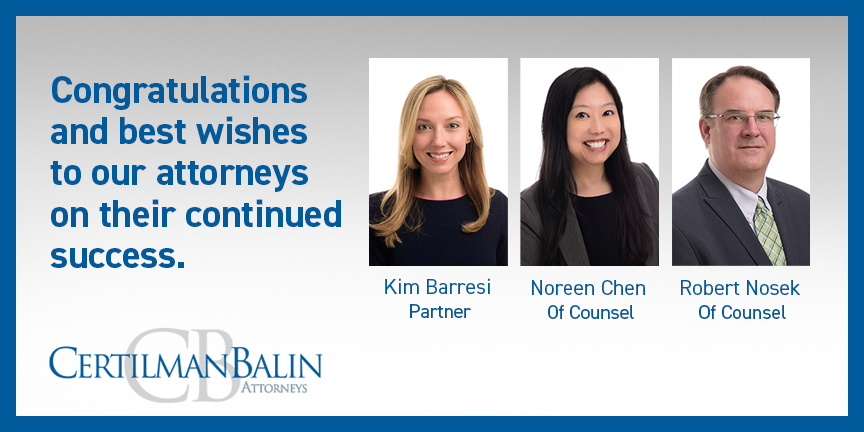 Kimberly Barresi (resident of Huntington), Partner in the Banking and Commercial Lending Group, concentrates her practice on the areas of banking and commercial lending, real estate and environmental law, with an emphasis on the representation of lenders and borrowers in connection with the financing of commercial real estate and asset-based transactions. In that capacity, she has closed many commercial finance transactions from start-up business transactions to complex real estate and business acquisitions and assisted with the structuring and documentation of environmental risk minimizing agreements.  Ms. Barresi earned her Juris Doctor and a Certificate in Environmental Law, cum laude, from Pace University School of Law and a Bachelor of Arts from the University of Maryland, College Park. She is admitted to practice in the states of New York and New Jersey.  From 2017 through 2021, Ms. Barresi was named to the New York Metro Super Lawyers Rising Stars list and to its Women’s Edition in 2019 and 2020.

Noreen Chen (resident of Westbury), Of Counsel in the Commercial Lending Practice Group, concentrates her practice on representation of institutional lenders in multi-family and commercial real estate mortgage transactions. Additionally, she represents lenders in providing financing to condominium boards and home owners associations, secured by the pledge of common/maintenance charges and assessments. Ms. Chen earned her Juris Doctor from the Maurice A. Deane School of Law at Hofstra University and her Bachelor of Arts, magna cum laude, in Speech-Public Address from St. John’s University. As a Law Clerk, she practiced in the areas of personal injury, medical malpractice, discrimination and worker’s compensation cases. She is admitted to practice in the State of New York.

Robert Nosek, (resident of Glen Cove), Of Counsel in the Bankruptcy and Debtor/Creditor Rights Practice Group,  has significant bankruptcy law experience with a unique perspective, as he has worked in both private practice and in the courts.  As a practitioner, he has represented numerous clients in all areas of insolvency including secured and unsecured creditors, Chapter 7 and Chapter 11 trustees, creditors’ committees, and individuals and businesses as debtors in Chapter 11 and Chapter 7. Mr. Nosek earned a Juris Doctor from St. John’s University School of Law and a Bachelor of Arts in history from the California State University, Long Beach. He interned for The Honorable Burton R. Lifland at the United States Bankruptcy Court, Southern District of New York, and was a staff member of the American Bankruptcy Institute Law Review. He is admitted to practice in the state of New York and the United States District Courts, Southern and Eastern Districts of New York.