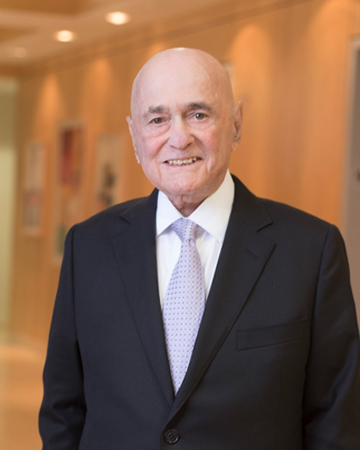 Louis Soloway is a Partner in our Real Estate and Land Use and Zoning Practice Groups. Mr. Soloway has earned a distinguished reputation for providing counsel in matters involving land use and commercial real estate law transactions, on Long Island, in the New York metropolitan region, and across the county. He has been practicing law for 65 years.

Retained by developers and corporate real estate departments, he assists clients in every phase of commercial and residential projects. With experience in most local jurisdictions, he advises clients on zoning, site plans, variances and all other aspects of land use and development.

Mr. Soloway also brings an astute financial sense to real estate transactions. He is often asked to counsel clients on purchases, leases and operating agreements. He has a reputation for finding simple solutions for complex real estate problems.

He is a philanthropist and shares his knowledge with his peers. He served as a director of The Rehabilitation Institute and has been honored as Humanitarian of the Year by that organization. He also served as chairman of the Real Estate Committee of the Nassau County Lawyers Association and is currently a member of both the New York State Bar Association and the Nassau County Bar Association where he has served on the Real Estate Committee and the Grievance Committee.

Mr. Soloway holds degrees from Columbia College and Columbia University School of Law. He is admitted to practice in the state of New York; U.S. District Courts for the Southern and Eastern Districts of New York; and the Supreme Court of the United States. He has achieved and maintained the highest AV rating from Martindale Hubbell throughout the course of his career, and the Nassau County Bar Association honored him for 60 years of service.  He is also counted among the Who’s Who in American Law.

Recognitions
Humanitarian of the Year, The Rehabilitation Institute
AV Rating from Martindale Hubbell