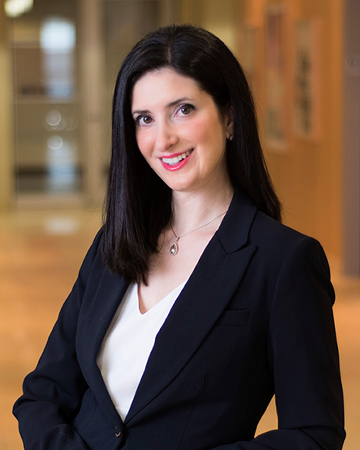 Kristen Traganas, Partner in our Banking and Commercial Lending Practice Group, primarily represents institutional lenders in providing financing for multi-family and commercial properties, as well as for middle market and small business borrowers. In addition, she represents lenders with respect to financing for condominium boards and homeowners’ associations, secured by the pledge of common charges, maintenance charges, assessments and other future receivables. Mrs. Traganas also acts as counsel to banks with respect to the negotiation of certain tri-party agreements, including but not limited to, various lockbox and deposit account control agreements.

Mrs. Traganas also represents current and prospective homeowners and commercial property owners in the purchase of property and refinance of debt. Along with her representation of lenders and borrowers, she also acts as counsel to both landlords and tenants in the negotiation of commercial and residential leases.

She is admitted to practice in the state of New York.

Prior to joining Certilman Balin, she worked as a settlement agent where she represented various lenders with respect to the residential mortgage transactions. She closed deals in Nassau, Suffolk, Manhattan, Brooklyn and Queens.

Mrs. Traganas graduated from Hofstra University School of Law. While studying there, she was a member of the Hofstra Labor & Employment Law Journal. Her note “Employment Discrimination and the First Amendment: Case Analysis of Catholic Charities,” was published in its 2005 edition.

Prior to becoming a lawyer, Mrs. Traganas worked in the music industry in the Manhattan offices of two international record labels. There she specialized in artist development, with a concentration on film and tv music. She negotiated and secured licensing deals, and cleared synchronization licenses and publishing rights. She earned a Bachelor’s of Music in Music Business from New York University’s Steinhardt School of Education, Department of Music and Performing Arts. She was the recipient of a merit scholarship, earned a place on the Dean’s List and was a member of the NYU Music Business Association.