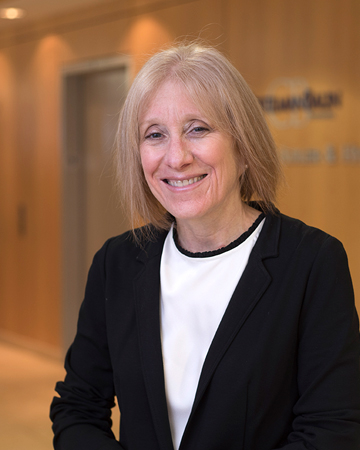 Dale Allinson is our partner in the Real Estate Tax Certiorari and Condemnation Practice Group.  Known for her success as lead trial counsel on numerous landmark cases in the field of tax certiorari, she has been cited as an authority in Lee & LeForestier’s treatise, Review and Reduction of Real Property Assessment In New York.

Published in professional journals and real estate media on the topic of property valuation, she served on the Board of Editors of Commercial Leasing Law and Strategy, a Law Journal Newsletter. Ms. Allinson also lectures in her field to professional and civic associations.

Named one of Long Island’s “Top 50 Women” by Long Island Business News in 2002 and 2003, she also made their list of Who’s Who in Professional Services. She achieved the highest professional rating by  Martindale Hubbell.

She also serves on the Business Advisory Council of the  North Shore Child and Family Guidance Center, and has been a mentor in the Lawyers Involved in Kids Education Program (“LIKE”), which is affiliated with the Long Island Mentoring Partnership. A flautist, she plays in the Freeport Community Band and serves as the organization’s president.

Ms. Allinson graduated from St. John’s University School of Law and earned her undergraduate degree in Environmental Science from the Stony Brook University. She is admitted to practice in the State of New York, and before the U.S. District Court and the Eastern and Southern Districts of New York.

Outside the Office
Flautist in Freeport Community Band